An educator by profession, Sonia’s foray into the writing world was by a fortunate stroke of serendipity. While on a break from work in 2016, she was approached by a children’s newspaper to write and translate for them. A closet writer until then, it was almost her ‘if wishes were horses’ moment and she grabbed the opportunity with both hands. It was at Keekli that she learnt the basics of the writing and the publishing industry. Soon, she branched out into the wide world of webzines and began to pen for platforms such as Momspresso and Women’s Web until she found a place of her own. In the year 2018, Sonia started her own blog called ‘A Hundred Quills’ which is a repository of soulful poetry, flash fiction and personal narratives in English and in Hindi. She also works as a freelance copyeditor and proofreader for several publishing houses.

In a journey spanning a little over four years, Sonia has won several online writing contests and was a finalist in the humour and poetry categories at the ‘Orange Flower Awards-2020’ hosted by Women’s Web. She was also part of the anthology ‘Poems from 30 Best Poets’ published by Literatures Light in 2019. A collection of her poems titled ‘Life, Women and Everything in Between’ can be found on the Juggernaut platform.

Besides writing Sonia has been passionate about theatre and alternative education. She has been making an effort towards the latter by volunteering for organizations such as Slam Out Loud that promote teaching through art. In a similar endeavour, she also launched her Ebook ‘Unlocked- Historical Tales in Verse’ during the Blogchatter Ebook carnival 2020.

An enthusiastic traveller and nature lover, she calls solitary, long walks her manna from heaven. Sonia belongs to Shimla and lives in Delhi with her husband and two children. 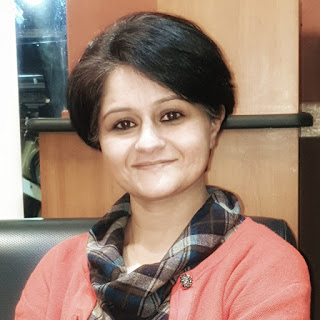 This poem is inspired by the series of paintings titled “Ahlam Yoga” by Ahlam Abbas. 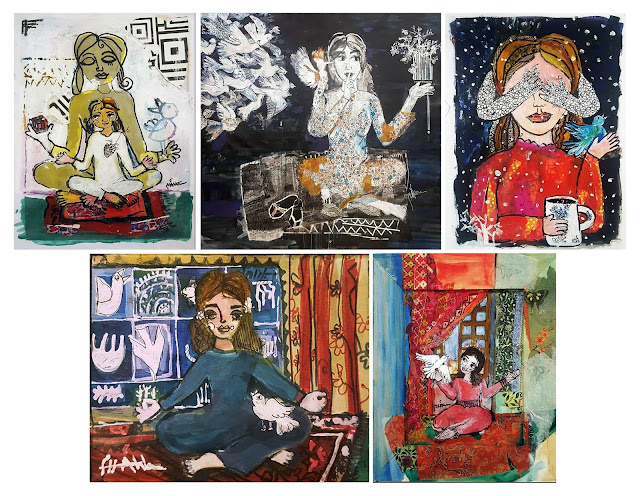 drinking from a cup of tea

lingering on the kitchen table

as the wall clock in haste

emptied time in a trash of screens

i sought colours of lost irises

gathered in a Rubik’s cube

priesting, flew by the crested hoopoe*

and secretly glistened the morning dew

the hearth with their warmth imbued

the eyes ached to see

those separated by destiny

i journeyed to the inside

with Apollo by my side

striking off what I’m not

to seek who i am tonight

must I have watched the tamasha unroll

should I have sunk in this palpable tragedy

riding through flakes up to the fall

just then, unfazed on an orange flower

a wondrous butterfly perched on the bower

my master strokes the canvas filled

works of Matisse* saved the hour

the airbrush and acrylics, a haiku and rhymes

is art, they asked, even worth a single dime…

a poem silently IGNITEs from within the confines

* cypresses- symbolic of death and the underworld in classical tradition.

* Matisse- means a free and gentle spirit; stands for French painter and sculptor Henri Matisse, a great lover of poetry

Which of These Will Last?

Love, cooped up in pigeonholes

in baking and making spaghettis.

breathing down the other’s neck

each second in time.

brooding over lonely cups of coffee,

Holding the gaze to look at that face

on the other side of the touchscreen

facetiously holding back the desire to touch,

that lingers on after a long embrace.

with walls closing in,

but smothered by love,

asphyxiated, with no space to breathe.

from across the seas

Love seeks a place to bloom

THE JAR OF BELIEF

The ‘ charger’ was ready and happily neighed

As a knee-high soldier silently prayed

The invisible army was all set to move

When they heard a loud clatter of hooves.

‘The enemy seems very close to the willows’

The Marshall and his soldier picked up their swords

Camouflaged in a thicket, their bearings pretty clear

The Commander in the centre positioned without fear

The fanciful army patiently waited in the wings

Should the Commander fall, it would be called in.

They fought with valour striking the enemy down

Two boys in battered clothes who lived in shanty town

And yet they cackled and played and also ran wild

Spun a million stories of unicorns that smiled

They also built an army that stood by their side

Whisked off the enemy which had barged inside.

Grinned like a Cheshire cat to light up the dark

Their eyes like lithe dancers, seemed happy as a lark.

With everything in nothing they filled their jars with ‘belief’

The mystic healing potion for countless seasons of grief.

I’d Rather be a Dandelion

Not have a care

for the wise to be

to be called unruly

And dress up in yellow

a spring so sprightly

I’d grow up in cracks

or jump across lawns

to the roses and the lilies

But I’d still be a Dandelion

I’d sit on a teacher’s desk

To eventually be gone

without remorse or regret

I’d rather be a Dandelion

I’d rather be a Dandelion

Remember love,
That ‘Happily Ever After’
Doesn’t necessarily mean
No gloom at all.

Spring is a season love
But it doesn’t rule the roost
Icy winds do blow in time
And winter also gets its due.

You may then, love
Light up the fireside
And know that’s the way
to keep the warmth.

It’s a constant hanging on
When you are there,
At the end of the rope
And all else is gone.

The belief that it isn’t craggy
Is a bubble in fool’s paradise
Which certainly isn’t to say
That there’s nothing that’s not nice.

Moods may be belligerent
And days all dull and worn
For Arcadia is to hearts
A place fleetingly known.

And yet, those in love, stay on
This I must confess
Because for some reason
They are besotted by this mess.

So, to ensure that the charisma
Of a leaden monotony
Tempts them longer
Than just a while, they…

Remember love,
That ‘Happily Ever After’
Doesn’t necessarily mean
No gloom at all!

How does a poet become a poet? Is there a date, a time, an ideal place where it all begins?

I don’t remember the first poem I wrote for I scribbled gazillions of words on purposeless sheets of papers and stacked them in a file. It was only when they were typed and compiled by someone dear that I realized I had made poetry.

Poetry is my way to unravel the layers of my subconscious, it’s the pair of glasses I use to view the world and is a reflection of me. I like brevity when it comes to writing or even making conversation. Poetry does that for me.

‘Ignite and Other Poems’ are a little attempt to light up the world with the words of a poet, particularly at a time when the world seems to be crumbling.

While I like poems to have a rhythm and rhyming is my preferred style, not all poems in the group follow a rhyme scheme. They all, definitely have a pattern. I don’t believe in structures. I believe in flow.

IGNITE based on the work of artist Ahlam Abbas attempts to put to words five of her art pieces that depict life after the Corona Virus. A journey within after solitary confinement and the contribution of art in lighting up life. Symbolism has been used in the poem with the hoopoe symbolic of spiritualism and the cypress denoting death.

‘Which of These Will Last?’ compares love 24/7 in the other’s company and that between lovers separated by the virus. The recurring use of ‘screens’ is deliberate and points to the new normal.

‘The Jar of Belief’, ‘I’d Rather be a Dandelion’ and ‘Remember Love’ offer verses of hope in a fast dwindling world.

Ahlam Abbas from Beirut is paired with Sonia Dogra from Delhi. Ahlam was part of my 2016 exhibition 'Repercussions' as well. She is living in a city that is already in turmoil and distress even before the pandemic began. A beautiful city on the way to ruins by vested interest. It was a task for Ahlam even to film her introduction video as she was residing in her village at the time. She had to travel to the city just to film it and send since she didn’t have Wi-Fi in the village and yet she managed to do so. Sonia is from the land of deodars and Ruskin Bond. If you notice, Ahlam and Sonia have a child-like charm to them! Their eyes sparkle and their smile is pure joy. They have a naïve energy about them that makes their work adorable and elevated. Ahlam’s works are collages and she layers it with paper, tissues and in some earlier works with found elements. There’s a seeming simplicity to both their works but when you observe carefully you will find geographies present there – literally and metaphorically. I found Sonia through ‘Unlocked – Historical Tales in verse’ that she describes as “lyrically rekindles your love for history”. The simplicity of language and yet the value that it adds particularly to children who find history unbearable is what caught my attention. 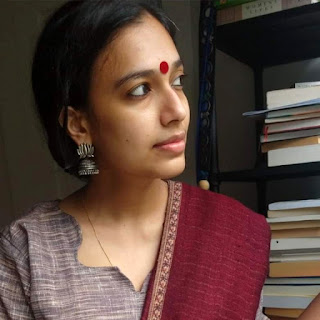 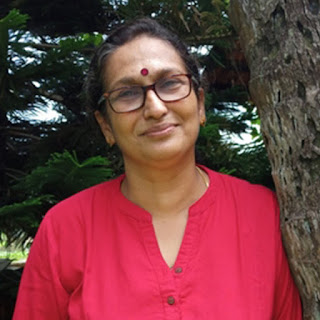 Biography:  Mini is a writer and English language trainer based in Kochi, Kerala. She writes poetry and fiction in addition to features on travel and education. She has been published by Grey Oaks and RIC Journal, and her texts have twice been part of Seagull Books’ annual catalogues. She has a blog where she sometimes thinks aloud the thoughts that cross her mind. Mini’s writing has its roots in her own experiences as well as those of others she has met and interacted within the course of her life in India and the UAE. Mini has worked as a freelance journalist for leading publications in the UAE, where she lived for fourteen years. During the period, she also worked as an external consultant with major PR companies, providing written content for both government and private sector clients.  Having worked for a number of years as an English teacher with one of the oldest schools in the UAE, Mini was closely involved with the region’s academic scene even after she stopped active teachin